Picture slideshow with the best known buildings of Marosvasarhely.

According to written documents during the rule of prince Mihaly Apafi in 1689 many Jewish families settled in the surroundings of Marosvasarhely in Naznanfalva and Marosszentkiraly. By the 1740’s their community had about 200 members, becoming the second largest in Transylvania after Gyulafehervar’s.

Large numbers of Jewish families arrived to Marosvasarhely from the 1850’s, according to the community’s archives there were 2755 in 1910, and 3246 after the first World War. In 1941 the census shows 5693 Jews in the town, which is 12% of the population. These people were mostly taken to concentration camps, forced work camps, so after the second World War their number went down to about 1500. After the state of Israel came to existence many left Romania for Israel, so the community had 820 members in 1947 and today it has about 150. 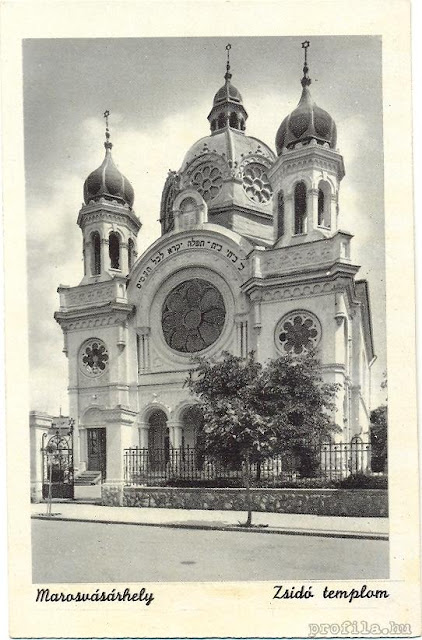 The story of Juci Scheiner – Love on a Motorcycle with English subtitles, a Centropa film. Learn about the fate of Hungarian Jews and the synagogue in Marosvasarhely.

October 9 is the Holocaust remembrance day in Romania. This was the day in 1941 when the deportation of Jews started there.
In the movie you can see people gathered at the Holocaust memorial on Lajos Kossuth street to commemorate the 7549 victims of Marosvasarhely. Between 1940 – 1944 from Marosvasarhely and surroundings around 10000 Jews were deported.